When Product Market Fit Does Not Equal Growth

When Product Market Fit Does Not Equal Growth

Founder and CEO at Aprildunford.com

About the speaker
A globally recognized leader in positioning.April Dunford is a positioning consultant, speaker, and author.

Ms. Dunford opened the SaaStock presentation by saying, “Fundamentally, as startups, we all want to grow, so we're all looking for a pathway to scalable, repeatable sales. But at the same time, we know that scaling too soon doesn't work. In fact, sometimes it can be downright dangerous. We have a set of fundamental assumptions - that we need to validate - before we can efficiently and effectively step on the gas. So how do we know when we step on the gas?

After I got the jokers out of the way, and the fighters out of the way, we did come to a consensus. What do you do after you have product market fit? About 82% of the people that responded to that tweet said, Now we're going to focus on scale.

There's a handful of different ways that we could measure it. Some people will try to measure it with something called Net Promoter Score or, how disappointed would you be if this product went away? Both of these are kind of measurements of customer happiness. Some people look at it in terms of churn and retention. Then there are the romantics... they say, ‘you just know.’

If you look at all the rest of these things [besides the romantic approach], it's kind of a measurement of happiness. If I have happy customers, I have product market fit.

In my experience, as a repeat vice president of marketing at a series of seven startups - six of those being acquired, which got me landed at five big companies - we had very, very happy customers, and yet we did not know how to scale.

What these guys actually had, was a product that helped you manage internal software development projects. So, I go to the CEO and I'm like, Okay, who's your ideal customer in this market? He says, Ideally, we're going after Fortune 1000 companies.

So, I said, Do all fortune 1000 companies have internal software development projects? What if I'm a mining company? They're like, We take those off the list. Okay, so it's Fortune 1000, minus the mining companies. Okay, I got it. And then I said, Hang on, I've worked at a tech company. I've never heard of your stuff. If you're a tech company and software is your product, would you target them? He says, No, we take those off the list too. Okay, Fortune 1000 minus the mining companies, minus the tech companies. That's your target market. He says, That’s my target market. I'm like, But wait, what if I have a big internal software development project and your product helped with that? He said, Yeah, we might sell the occasional one like that, but it's not really in our target.

But when we did the research and we looked at all their super, super happy customers, the commonality that there was amongst those customers had nothing to do with company size at all. In fact, the companies that were the happiest, loved the product because it helped them solve the problem of: How to manage a software development project when you had a distributed team.

Why did they have a distributed team? Because they were outsourcing a lot of development. So, in this case, we rejigged all the marketing and sales programs to focus just on bigger companies that were doing a lot of outsourcing. That unlocked a pile of growth and the revenue began to take off.

So, just because you have product market fit, and happy customers, doesn't mean you know how to grow. If you are using a measurement of product market fit to try to determine: When is the right point to start focusing on scale; I believe that is the wrong tool for the job. So what is the right tool? In order to scale, I need to deeply understand who loves my stuff and why.

The previous example is a good example of that. If you come to me as your brand new Vice President of Marketing and say, Hey, build me a bunch of campaigns to go after Fortune 1000 companies. I don't know how to do that. How do I target fortune 1000 companies when there's no commonality in that segment. But, if you came to me and said, Build me marketing campaigns to go after companies that do alot of outsourcing, now I’ve got something to work with. I know where those people hang out. I know what trade shows they go to. I know there's a person inside that company that has outsourcing in their title; I can find them on LinkedIn.

Did you know there's actually a magazine called Outsourcers Magazine and you can take a full page ad in that magazine. It costs $5,000 and these folks drove hundreds of thousands of dollars of revenue just from that one tactic alone.

There are five component pieces of positioning. You can determine them by working through them in a certain order. 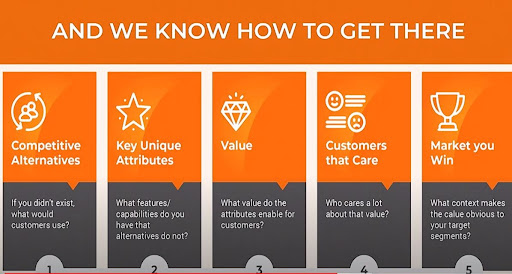 You find your happiest customers and you figure out the true competitive alternatives for them. If you didn't exist, what would they do? The next step is you look at what features and capabilities I have that the competitors do not have. I then translate those things into value for the customer.

And then, I ask myself, what are the characteristics of a company that makes them care a lot about my value? Until I can answer that question, with a certain degree of certainty, I am not yet ready to scale.

I'm going to give you one last story. Straight out of university, I got a job at a company - a startup that was famous for building compilers. That was their main product, but, unlucky me, I was not working on the main product. I was working on this little side-product thing, which was conceived as a personal-use SQL database.

The thinking behind this was... if you wanted to manipulate a bunch of data, you could use your personal use. Now, this was years ago. Back then, if you wanted a full SQL database, you had to install it on a server, because PCs were kind of underpowered and databases took up a lot of resources. Ours didn't though.

Ours installed really nicely on a PC. You could run it there, no problem. We were geeks; we thought this will be amazing. Everybody wants a personal use SQL database, right? This thing's going to sell like hotcakes. We launched it into the market and... it was a flop.

We spent six months trying to get the thing to work and it never really worked. So, at the end of the six months, we decided maybe we're going to can it. We're making lots of money in the compiler business, this one was a failed experiment. We didn't sell that much. But, we decided before we stopped servicing this product, that we would call all the customers we had and try to figure out if anybody would be really mad if we just stopped supporting it.

So, I got the job to call all the customers. I did 100 customer calls and said, Hi, I'm the person in charge of such and such a product and I'm just calling to see how it’s going with the product?
The first 10 people I called didn't even know that they had purchased the product. They were like, how do you spell it? What is it? I was like, alright, this is going to be no problem. We can shut this thing off. Nobody cares.

Problem was... customer number 10. I call him. I'm like, I'm so and so. I'm in charge of this product. And he says, Oh my God, I love that thing. I love it so much. I said, Really? How come you love it so much? He says, You should see what we're doing with your product. We actually put it on a laptop. We built an application on top of it and we can send a sales person out on the road and they can take a sales order. But, because it's an SQL database, they bring it back to headquarters and we sync with the Oracle database.

What we had to do before, was the sales reps did it all pen and paper. They'd come back, they'd rekey it in, they'd make mistakes. They'd have to go back and forth. We're making thousands of dollars a day by using this thing.

So I said, That's cool. I guess you're going to be pissed off when I tell you we’re shutting it off. I wrote the notes down on that, I did a hundred customer calls, and it turned out nine customers were using it that way and they were the only people that were happy.

I came back to the office and said, Well, good news and bad news. Good news is, I found nine happy customers. Bad news is they're using it for this weird thing that we never intended. What do you think we should do?

So, we decided... let's take a run at it. We looked at the market and said, that looks like a big market. That looks like a growing market. We know how to identify those people. Maybe we'll reposition the thing as an embeddable database for mobile devices, which we did.

We ran a bunch of campaigns and the thing took off. We grew super, super fast. Within six months, that database product had overtaken the compiler business. We had an acquisition offer from a big company in Boston; which we took, and we got acquired because of this database that was growing so fast.

The company that acquired us ended up getting acquired by the biggest database company in the land at the time, which was Sybase. And, at the peak of its glory, that product - which was called SQL Anywhere - was a little under a billion dollar business and we almost killed it because we didn't have product market fit.

The lesson here is that sometimes a product market fit is just not a relevant concept. When you're thinking about growth, a relevant concept is... do I deeply, deeply understand who the customers are that love me, and why, and can I get to an actionable customer segmentation?

I want to leave you with [a couple] things. One, product market fit is a neat concept. If it's working for you, keep using it. But, I don't believe it's the right tool for the job to figure out when you're ready to grow. Secondly, I do believe the right tool for that, is to figure out how to get an actionable customer segmentation. You can get to a national customer segmentation by going through a structured process to work on your positioning.”