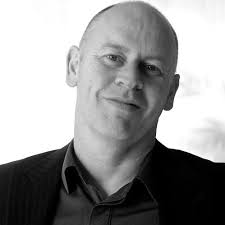 About the speaker
CEO & Founder of AppSelekt, Podcaster @ 14 Minutes of SaaS. 25+ years experience in 8 countries. 6 languages. >10 yrs in Salesforce.com from startup in diverse biz+tech roles. Expert and Influencer in SaaS. Influencer in the Salesforce Ecosystem. Ex Biotechnologist. 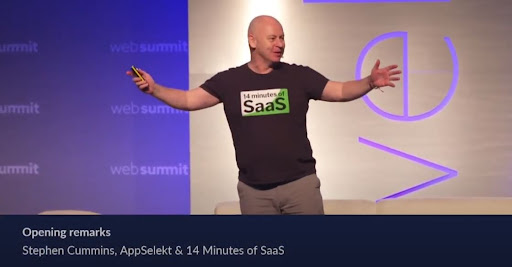 Mr. Cummins opened the presentation by saying, “I'm going to be introducing some of the greatest founders and C levels in SaaS today. I'm going to take you through a presentation, in which I'll present to you: four amazing founders who solved problems close to them, in the office. It's about solving one small problem and actually mushrooming into a great company.

The world is broken. That's the default stage with the world. Nothing is ever in a state of perfection. So, we're going to look at four founders. Before we look at them, we'll look at one other founder, and listen to his philosophy. His name is Gary Tan. He's managing partner and founder of initialized.

Most people think it's too much capital, chasing too few good people, and too few good ideas. I say, that's ridiculous. Look at how broken this world is; there are so many problems to fix. There's just a lot of industries out there that have no tech. One thing that we often say is walk into any office building in any city in the world, and look at what they're doing, and see how they're doing it. We just love companies that bring great tech to places that have never had it. Infinite problems to solve.

Mr. Cummins said, “Infinite problems. And most of them are right under your nose, and the best ones to solve.

Okay. So, we'll start with Larry Gadea, CEO and founder of Envoy...

He believes in looking for boring problems. But, he understands there's a good reason that he needs to make the solution very interesting. Have a listen [to Mr. Gadea]...

‘Look for things that people aren't excited about. The challenge is that you have to make it exciting. It's really hard to convince a bunch of engineers, who are top talent, to work on something really boring. Our core product, Envoy Visitor Registration System, which is basically... If you've ever gone into somebody's office and they have an iPad up front and you’ve got to type in your name and your email. Maybe they make you sign an NDA or that kind of stuff. When somebody signs in using Envoy, it notifies you via Slack. It posts into a database. It can integrate with your applicant tracking system. It integrates with Salesforce and updates the CRM information. It integrates with Box and Dropbox to upload your NDA into a place that legal knows where to look.’

Mr. Cummins said, “So... starting with a simple sign in problem. And most of you probably signed in with Envoy before. They have 15,000 offices around the world with 150,000 people signing in on a daily basis. And as you can hear from the integrations, that data has taken on another life of its own.”

*We're leveraging our, kind of, Trojan Horse, to get into people's offices - through the front desk and through the visitor sign in - to the rest of the office. And you're not solving a visitor sign-in problem. You're solving a problem around a lack of attention to the end user experience. And that's why we're building stuff for the mailroom. We're building stuff for the meeting room. That's why we’re building door access. These are all areas that are critical to businesses, but people don't think of them as an exciting, sexy thing in the office. And that's such an opportunity. *

Mr. Cummins said, “Founded in 2013 in San Francisco. He's raised 59 million at this stage for Envoy to elevate the work experience. It's a Trojan horse strategy. He's not just done a lot with the data, he's moved from the front office into every room in the office building.”

Have a listen [to Polina]…”

‘I was actually running a chain of petrol stations back in my country, Luxembourg. A petrol station, in Luxembourg at least, is a very... I would say, hardcore traditional retail business. It's open seven days a week, opening hours are very large. So, you constantly need people to work in shifts. And basically the turnover of both staff and customers is very, very high; very high volumes. So, it's really, really challenging filling those positions and making sure you have people in the right place at the right time. Hiring in those sectors is very different, because we are talking about urgency here. Because these are operational sectors, the success of your operations literally depends on people.

All of those local jobs were just not available online; they're hidden and job seekers can’t find them. So, that's a pain-issue we wanted to solve. Just connect instantly over mobile interface. People who are looking for staff and candidates who are looking for jobs.’

Mr. Cummins said, “So, retail, hotels, restaurants, that's where you get this kind of staff turnover problem. Founded in 2015 - coming from a non-tech background - she's already raised 81 million - with her co-founder and her team - for the business. They have 700,000 companies on their books, since 2015, and they've processed over a hundred million applications and helped millions of people get jobs within 24 hours.”

Mr. Cummins changed topics, saying, “Meet Michael Litt. He's the CEO and cofounder of Vidyard - a video hosting platform - and he came across a problem while he was working for Blackberry back in the day. Have a listen [to Mr. Litt]…”

‘When I was at Blackberry, one of the projects I led, was to bring in a company to develop a series of videos that were designed to help a small business owner install this fairly complex device management software. It was complicated. Video was the best way to help these people use the software and not put a huge support and resource burden on Blackberry, at the time. This company charged, I think $80,000 for what was effectively five videos, and the videos were nothing special; something that I realized I could potentially do in my basement on evenings and weekends.

We started that company, and went back to my coworkers at Blackberry - and other businesses - with this idea of... we're going to help you make videos to solve these problems and reduce support burdens.

Of course, every time we made a video, the question always came back... How do we put it on our website? YouTube on blackberry.com was a bit of a challenge, because a YouTube player functions as an outbound link to youtube.com - which is an ad monetized platform. That's the way they make money.

If your competitors are smart, they can advertise against the videos you have on your homepage. And in fact, when the Blackberry Playbook launched - if you remember this tablet - at the end of the video - which is on Blackberry’s homepage - all the recommended videos were iPad versus playbook comparison videos. If you watched one of those, it was very likely that you weren't going to buy a Playbook.

And this was on blackberry.com. So we solved that problem by just building a simple video hosting solution. And then the questions came: How do we track who's watching the videos, and for how long? And, can we import that data into our CRM and our marketing automation system? Can we add interactivity? We existed to solve a problem.’

Mr. Cummins said, “YouTube created a problem for Blackberry, and by Michael solving it, led to the creation of a video hosting platform. Vidyard was founded in 2011 in Canada. They've raised over 60 million for their mission. So, he existed, initially, to solve one problem and then it expanded outwards. And that's the common theme here.

Coming on to our final example - probably the most successful one thus far - figuring out how to configure the buyer experience. This is Godard Abel, a series of successful founder. He solved one problem for his father, who sold pumps. And by solving that, he became obsessed with the buyer experience; and ended up creating four businesses off the back of that. Have a listen [to Mr. Abel]...

‘CPQ is Configure Price Quote, and it does go back to my father's pumps. I remember going home to visit my father, Thanksgiving 1999, and that's when we were talking about the internet and pumps. My father was very skeptical, that his pumps could never be sold online, because they were very configured, based on chemistry. So, based on pH, what the fluid was you were handling, the pressure, the flow rate. You had to configure the pump with different linings, housings, materials, motors, and he kinda explained to me… Look, you need a really good German sales engineer to put together the right pump for the customer's application.’

Mr. Cummins said, “So, Godard’s dad thought it was impossible to sell these pumps online. I actually worked in industrial chemistry many years ago. I'm quite sure he thought it was dangerous, as well. Because there's so many variables and dependencies. When you're buying a massive pump online, you might be pumping salt out of a mine, you might be pumping cleaning liquids in a car manufacturing factory. They all require different things. So very, very complex. He realized that perhaps online they could create a configurator to do this. He went after the problem...

‘I was in Silicon Valley and Cisco was selling complex routers and networking gear - already in 1999, online - with configurators. And the way configurators work, they kind of ask you... Hey, what do you need? Or in the case of a PC, like Dell, how much memory do you want? How much hard drive? What operating system do you want? And then a configurator has rules that - based on your customer requirements - puts together the right components and you'll configure exactly the device you want.

And, in real time, it's showing you pricing, lead time... And so it makes it possible to order very complex products online. That was really the idea. I'm like...Dad, why don't we build one online? You [can] call it Cloud or SaaS configurator for pumps and then you can sell your pumps online. And so we started building that in 2000 and he became my first customer. That was [the beginning of] my long journey down the CPQ path.’

Mr. Cummins concluded his presentation by saying, “As a result, he built a CPQ or Configure Price Quote, called BigMachines. Thirteen years later, in 2013, he sold out to Oracle for 400 million. Twenty-seven months after that, he basically replicated it for SaaS and sold that to Salesforce for a similar number.

And then he co-founded G2, again... all about the buyer experience; something that helps people choose and buy the right software. And on top of that, he's built another configurator, 3D configuration, which you can use for retail. That's called ThreeKit.

So one problem led to four massive businesses. The message I want to leave you with is... instead of dreaming up really interesting problems, why don't you just find a simple problem, that's under your nose, some pain you felt personally. Solve that, and that could end up taking you down a rabbit hole of interesting problems to solve.”